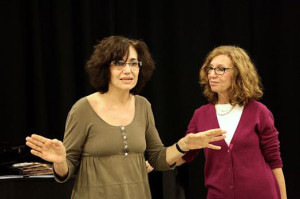 Beatriz Flores Silva is an Uruguayan/Belgian film director, film producer, screenwriter and teacher. Her films include: The Seven Deadly Sins (1990), The Almost True Story of Pepita the Gunslinger (1992), In This Tricky Life (2001) (which was Uruguay’s 1st submission to the Academy Awards) and Masangeles (2008). Beatriz is Uruguayan and established
Uruguay’s first National Film School and is a Board Member of the Belgian Association of French Speaking Filmmakers.

Marcello Bosschar is a Brazilian director, acting instructor at the Commedia School, writer and actor working and living in Copenhagen. Bosschar currently directs The Nausea with his Theater group “Cafe de’ll arte” and holds private acting workshops both in Europe and Brazil.

Peter McAllister is Senior Lecturer in Acting specialising in actor training derived from the work of Stanislavsky, Vakhtangov, Michael Chekhov and their American successors at the Royal Central School of Speech and Drama in London. He has also taught at the Samuel Beckett Centre, Trinity College Dublin, the Royal Scottish Academy of Music and Drama in Glasgow, and has
taught master classes at the Abbey Theatre and at the International Theatre Symposium in Dublin.

Frida Kahlo with blood red lips
Strange babies gyrating in the womb
Awkward teenagers dancing to Toreador
A very large dinosaur running round the room
An old cold woman trying to clear snow with a wooden spoon
A beautiful woman with a pomegranate in a strange embrace with a sinister gentleman
A lonely poet trying to talk to the anguished subject of Edvard Munch’s painting
Conflicting needs – lust vs cherish, humiliate vs entertain, beg vs seduce
Many Hamlets, a few Yelenas, an Astrov, a Chebutykin, a Nina
Lee Strasberg like an Old Testament prophet preaching his Method
A lot of laughter, many tears, lots of memories, and endless relaxation….
THANK YOU LOLA and the whole Class for nine days of incredible inspiration.
– Peter McAllister, CPH, November, 2013